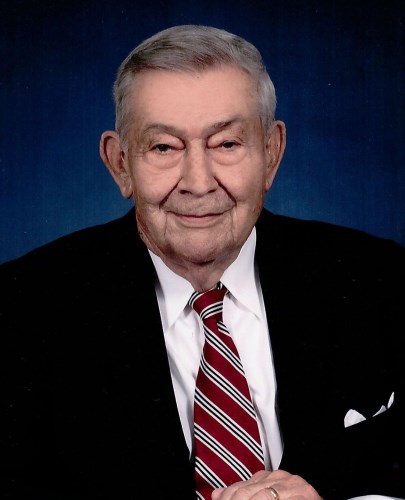 Jeep was born to Albert Washington Ford and Marion Suttcliffe Ford in Georgetown, SC on September 8th, 1925. He was predeceased by his son, Joel Parrish Ford, his brother Albert W. Ford, Jr. and sister, Cleo Ford Lightsey. He is survived by his wife of 75 years, Mary Louise

Jeep attended Porter Military Academy and entered the United States Navy in 1943 at 18 to serve in WWII. After serving on a troop transport ship, he was assigned to a minesweeper base commanded by Commander Joseph Bull of Georgetown. Commander Bull reassigned him to a special detachment on President Harry S. Truman's day cruiser. After an honorable discharge, he married his high school sweetheart, Mary Louise "Weezie" Parrish on June 1st, 1946. They made their home in Georgetown where he was president of his family's business, CL Ford & Sons. In 1955, he went to work for his father-in-law, Joel P. Parrish, at Parrish Motor Company. Jeep served on Georgetown Memorial Hospital's all volunteer board for 32 years and was Chairman of the Board for 25 years. During his chairmanship, Healthpoint at Litchfield and

Waccamaw Community Hospital were built and additional health services were expanded. He

was also instrumental in the establishment of the Francis B Ford Cancer Treatment Center.

healthcare from his namesake and uncle, Dr. Francis A. Bell. The two visited nearby rural

communities, and it was an experience that influenced his life.

Jeep also served as the first Chairman of the Planning Commission for the City of Georgetown and as chairman of the Georgetown County Economic Development Commission. In 2004, he received an award as SC Ambassador for Economic Development. In 2005, he received the Georgetown County Chamber of Commerce Lifetime Achievement Award. In 2000 and 2005, Jeep received the SC Hospital Association's Distinguished Trustee Award. This year, SC Hospital Association honored him as one of "100 Faces of Healthcare" in SC.

Jeep has been a lifetime active member of Duncan Memorial Methodist Church and served the community he loved in countless ways. He deeply loved his family, friends and the people of the Georgetown community. He was an avid boater, fisherman and hunter.

In-lieu of flowers, memorials may be made to Duncan Memorial United Methodist Church, Francis B Ford Nursing and Allied Health Education Fund c/o Tidelands Health Foundation or the charity of your choice.