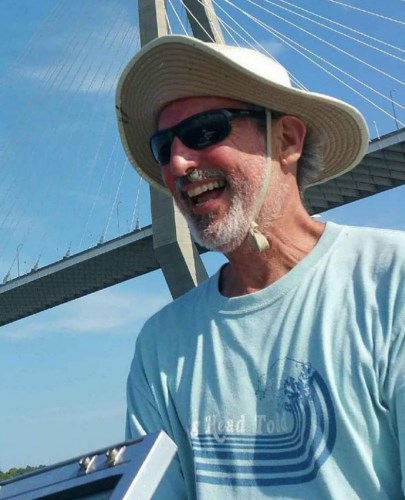 BORN
1950
DIED
2021
FUNERAL HOME
James A. Dyal Funeral Home
303 S. Main Street
Summerville, SC
Bryan Timothy Blitch, 70, of Summerville, South Carolina, peacefully entered into eternal rest on Sunday, May 23, 2021. Bryan was born on Halloween 1950 in Charleston, son of Daniel B. Blitch and Elizabeth Hyer Blitch. He began his education at Christ Our King-Stella Maris School, and then after the family moved to the American Naval base at Rota, Spain, where his father was a Department of Navy civilian, he graduated from DG Farragut High School where he was voted "Class Clown." After attending the University of Madrid, he returned to graduate from the University of South Carolina. He taught at several schools in the Lowcountry. He loved being in a boat and fishing with family and friends. Throughout his life he travelled extensively in this country, Europe and North Africa, and Central and South America including the Galápagos Islands. An aficionado of music in many forms he attended performances and festivals in many countries. Bryan made the most of his time whereever he was like "running the bulls" in Pamplona and "diving with turtles' in the waters of Galapagos. His incessant humor, his kindness, generosity, and love of family and friends was exemplified in the annual spring garden party for many decades attended by large numbers who enjoyed his cooking and live music performances by his friends. He is survived by his wife Theresa Sullivan Blitch, his son Bryan Thomas Blitch and daughter-in-law Courtney Starling Blitch, and his brothers Michael (Judy) of Mount Pleasant and Bruce (Gillian), of Santa Fe, New Mexico, and his cousin Dickie Halsey (Kay) of Charleston; and many nephews and nieces. Bryan was predeceased by his parents and his brother Barry Blitch (Carmen). He attended St John the Beloved Catholic Church in Summerville.

On a personal note, Bryan and I would like to thank our Blitch, Williams, and Sullivan families and especially Leigh Bishop and Thomas Williams for helping us during this very difficult time.

Memorials may be made in his name to a charity of your choice or the American Cancer Society.

ARRANGEMENTS BY JAMES A. DYAL FUNERAL HOME, 303 SOUTH MAIN STREET, SUMMERVILLE, SC 29483 (843)873-4040.
Published by Summerville Journal-Scene on Jul. 13, 2021.
To plant trees in memory, please visit the Sympathy Store.
MEMORIAL EVENTS
To offer your sympathy during this difficult time, you can now have memorial trees planted in a National Forest in memory of your loved one.
Funeral services provided by:
James A. Dyal Funeral Home
MAKE A DONATION
Please consider a donation as requested by the family.
MEMORIES & CONDOLENCES
Sponsored by James A. Dyal Funeral Home.
4 Entries
Bryan was a true friend for the long haul. He is missed by many and by our whole family.
Peggy Schachte
Friend
August 7, 2021
I was very privileged to have met Bryan, I would shoot the breeze with him when I worked on his truck. I was always amazed by his stories of life and how much he loved fishing for reds. I´ll miss you friend, god speed.
Bryan Strickland
Friend
July 19, 2021
Sounds like a man whom I wish had crossed my path . . . a life well lived . . . the people whom he touched were better for having time with him!
Mike Williamson
July 16, 2021
Bryan was an enthusiastic advocate for ESL students and helped so many over the cultural bumps that always occurred. We remember fondly his positive personality and good humor.
Jean and Mike Turner
Work
July 14, 2021
Showing 1 - 4 of 4 results