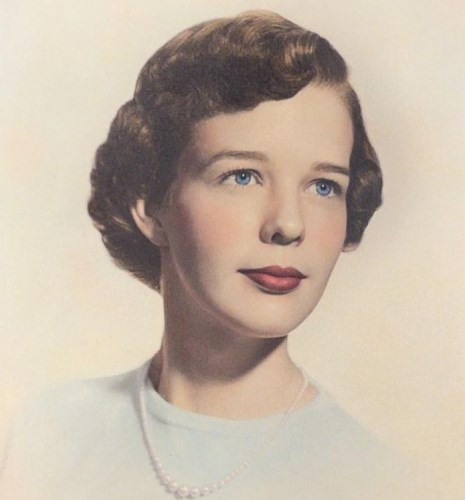 She married Kenneth "Bunky" Brewer Shore in 1958. During his long career in the military, they lived in many U.S. states - including North Carolina, California, Texas, Idaho, Hawaii, New Mexico, and South Carolina -- as well as Canada, and Dora made lifelong friends in all of them. They retired to Columbia, SC, in 1984.

When Phnom Penh fell to the Khmer Rouge regime in 1975, few Cambodians were able to escape the brutality. Among those who successfully fled to the U.S. were a mother and son who found refuge and support in Dora and Ken's home.

Over the years, Dora volunteered with a variety of organizations, including the Girl Scouts, Meals on Wheels and the Salvation Army. She was also very active in her church, holding many offices with the Presbyterian Women. She loved sharing her passion for arts and crafts with the young people of the church and frequently led Bible School classes.

After 25 years as an Avon representative, Dora decided to become a book and antique dealer, which allowed her to share her love of regional authors and cookbooks with the public. She opened a stall at a consignment shop in Prosperity, SC, which became a favorite stop for travelers on their way to the beach.

Dora was predeceased by her husband and daughter, Lisa Lane (Shore) Pierce of Columbia, SC; two sisters, Emma Lou Joyner and Edna Walsh, and one brother, Dermont Everhart, all of Winston-Salem, NC. She is survived by a grandson, William Alex Shore Price of Albuquerque, NM; a granddaughter, Ronnie McKenna Boles of Columbia, SC; several nieces and nephews, including Lee Joyner and Cheryl Joyner of Winston-Salem, NC, and Dawn Adams of Pinnacle, NC; and a favorite wild turtle, which we suspect is sunning on a log by Lake Murray today.

The family is grateful to the team and medical staff at Oakleaf Village and All Seasons Hospice who provided tender care for Dora during her long illness and to the cherished friends who brightened her days with their visits, flowers, phone calls and love.

To minimize any risk related to the pandemic, there will be a viewing at Shives Funeral Home at 7600 Trenholm Road, Columbia, SC, on Sunday from 11 a.m. to 6 p.m. so that friends and neighbors in the Columbia area may pay their respects privately before Mrs. Shore is returned to her hometown for burial. A graveside service will be held at Parklawn Memorial Gardens in Winston-Salem, NC, on Tuesday at 11 a.m.

Memorials may be made to Grace Covenant Church, P. O. Box 329, Irmo, SC, 29063 or Covenant Presbyterian Church, 3627 Konnoak Drive, Winston-Salem, NC 27127.
Published by Post and Courier - Columbia on Oct. 8, 2021.
To plant trees in memory, please visit the Sympathy Store.
MEMORIAL EVENTS
To offer your sympathy during this difficult time, you can now have memorial trees planted in a National Forest in memory of your loved one.
Funeral services provided by:
Shives Funeral Home - Trenholm Road Chapel
MAKE A DONATION
MEMORIES & CONDOLENCES
Sponsored by Shives Funeral Home - Trenholm Road Chapel.
1 Entry
Dora and Bunky were wonderful friends and neighbors. Dora was most caring and kind. We loss contact when we moved. Sympathy and blessings to her family. Peace
Brenda Turner
October 11, 2021
Showing 1 - 1 of 1 results