Nancy Thompson Barnwell
1948 - 2021
BORN
1948
DIED
2021
FUNERAL HOME
J. Henry Stuhr Downtown Chapel
232 Calhoun Street
Charleston, SC
Nancy Thompson Barnwell Charleston - Nancy Thompson Barnwell died on October 11, 2021. Arrangements are being made by the J. Henry Stuhr Inc. Downtown Chapel, and the family will have a private memorial service. Mrs. Barnwell was born January 12, 1948 in Charleston, South Carolina, the daughter of the late Russell Emery Thompson and Laurie West Thompson. She was a graduate of Ashley Hall and the University of South Carolina, where she also completed advanced degrees. Mrs. Barnwell taught mathematics beginning at Ashley Hall, then at the Baptist College (Charleston Southern University), and finally at Berkeley High School, before choosing to pursue a Master's Degree in Library Science. She retired as the school librarian at Marrington Schools. A friend to nearly everyone she met, she was passionate about serving her community and was elected to the District 20 Constituent School Board for several terms; served on the boards at Communities In Schools and Charleston Friends of the Library, among others; and provided support in various ways to the Spoleto Festival USA, most recently as a house manager. She was a devoted recreational athlete, making numerous lasting connections through her participation in tennis, dance, and swimming up until shortly before she passed away. Mrs. Barnwell is survived by her husband, Nathaniel Elliott Barnwell of Charleston, SC; her son, John Russell Barnwell (Sarah VanWye); two grandsons: John "Jack" Benjamin Barnwell and George Russell Barnwell of Takoma Park, MD; and her brother, Donald West Thompson of Mt. Pleasant, SC. She was predeceased by her son, Thompson Parker Barnwell. Memorials may be sent to the Halsey Gallery, 161 Calhoun St., Charleston, SC 29424, the Spoleto Festival USA, 14 George St,, Charleston, SC 29401, or to a charity of one's choice. Visit our guestbook at legacy.com/obituaries/charleston
Published by Charleston Post & Courier from Oct. 11 to Oct. 12, 2021.
To plant trees in memory, please visit the Sympathy Store.
MEMORIAL EVENTS
To offer your sympathy during this difficult time, you can now have memorial trees planted in a National Forest in memory of your loved one.
Funeral services provided by:
J. Henry Stuhr Downtown Chapel
MAKE A DONATION
Please consider a donation as requested by the family.
MEMORIES & CONDOLENCES
Sponsored by J. Henry Stuhr Downtown Chapel.
14 Entries
I have been devastated over the death of Nancy. She was a wonderful person and a dear friend. I was blessed to have known her for the past seventeen years, and enjoyed working with her in the library at Marrington. She was always a happy person who loved life and always had a smile on her face. She will be missed.
Jennifer Stufflebeam
Friend
October 15, 2021
So so dad to see if Nancy´s passing. My condolences to all her family and friends. She was such a bright light!
Tammy Solomon Conner
Friend
October 15, 2021 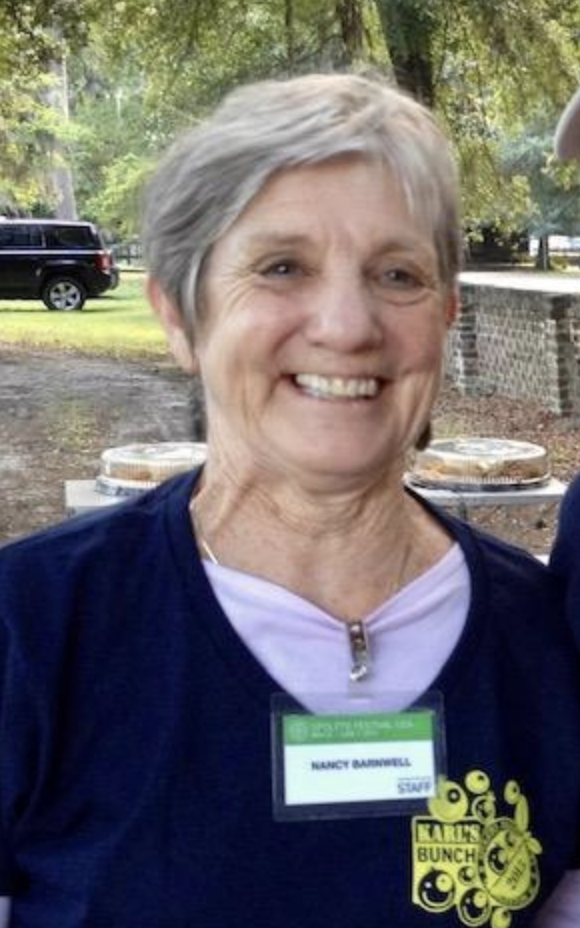 Volunteering with Nancy for Spoleto since 1987 and knowing her through family and friends, we grieve at the loss of a dear, fine person. Her cheer, wit, and kindness were constant. Our prayers, love, and profound condolences to her beloved family and friends. Will miss you...
Sara and Kevin Dwyer
Friend
October 14, 2021
It was with a heavy heart that I learned of the passing of Nancy Barnwell, a longtime and cherished House Manager at Spoleto Festival USA. Nancy will be missed by all of the Spoleto staff who had the pleasure of working with her. I feel lucky to have worked so closely with her during the summer of 2021, which was a hectic and sometimes stressful time- But her endless positivity and joy for the arts always reminded me why working at Spoleto is so special.
Anna Brown
October 14, 2021
Mrs. Nancy was such a lovely neighbor and friend. I will miss our conversations dearly. Love Always, Richard and Aubrie Salmons
Aubrie Salmons
Friend
October 14, 2021
Sending love light and peace to your beautiful family Nancy meant the world to the whole wide world, I believe. She was so warm, brilliantly smart, full of life and always had the perfect words to offer her friends. I wish I had some for this heartbreaking occasion. She was/is pure magic, truth and love.
Amanda Smith
Friend
October 13, 2021
My heart breaks for Elliott, John and Don... I´m so very sorry to hear this sad news. May your fond memories of her give you comfort during this time. Her Christmas Eve gatherings were something we all looked forward to and sill miss. She was an outgoing, kind and fun person.. I will miss her..RIP my dear friend. Prayers are with you all. Hugs..m
Melinda Nicholson
Friend
October 13, 2021
I am saddened at the death of my friend, Nancy. She was a kind and gentle lady. I knew her through the Spoleto Festival where she was my mentor and colleague. My condolences to all of her family and friends in their loss.
Sue Chanson
Friend
October 13, 2021
John and Elliott, When I was temporarily living on Colony Dr., I always enjoyed running into Nancy when she was out walking in the neighborhood, or chatting with her at the grocery store. I will certainly miss catching up with her at Halsey Gallery openings as well. My heartfelt condolences to you and your extended family members.
Jan Welborn
October 13, 2021
Mrs. Barnwell was a professor of mine when I attended Charleston Southern University. She was a wonderful professor, along with being very sweet and caring. Sending prayers to her family and friends. May she Rest In Peace.
Alenda Wiesand
School
October 12, 2021
Nancy's friendship, exuberance and love of family graces my life. I hold the family dear and in my thoughts.
Danny Burbage
Friend
October 12, 2021
I have been devastated by the news of Nancy´s passing. There no words to express my deepest condolences. I had no idea she had been sick. I will miss her at Spoleto events and other events where we ran into each other. We were a group of faculty at Baptist College who ate lunch together and became friends.
Georgia Schlau
Friend
October 12, 2021
God's Peace to everyone. She was a great tennis partner and person. Nancy you will be missed.
Jo Trippe-Gregory
Other
October 12, 2021
Elliott and John, we are sending our love and will always have great wonderful memories of Nancy. Our prayers for healing and our thoughts are with you. Sue and Baron, Cashiers, NC
Sue and Baron Holmes
Friend
October 12, 2021
Showing 1 - 14 of 14 results