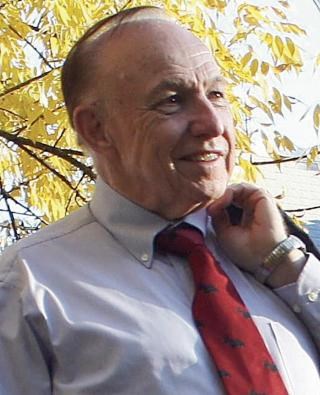 FUNERAL HOME
Smith Funeral & Cremation Service
1402 Tuckaleechee Pike
Maryville, TN
Dr. Gerald Gibson Maryville, SC - Dr. Gerald W. Gibson, father, husband, granddaddy, and President Emeritus of Maryville College, passed away May 20, following an extended illness. He was 83. He was a member of New Providence Presbyterian Church in Maryville, TN. Gibson enjoyed a 45-year career in higher education and often reminded his family, "Knowledge is power." A native of Saluda County, S.C., he spent much of his childhood in Spartanburg. He studied chemistry and earned degrees at Wofford College (B.S.) and the University of Tennessee-Knoxville (Ph.D.) and served as a member of the U.S. Army Chemical Corps prior to joining the faculty at the College of Charleston in 1965. He served as chair of the chemistry department at the College of Charleston from 1968 until 1982, when he was named associate provost for academic affairs at the College. In 1984, he left to become vice president and dean of Roanoke College in Salem, Va., where he served for the next nine years. Gibson was inaugurated as Maryville College's 10th president in 1993 and retired in 2010. Credited with leading the College into its current state of historic strength, he took the helm when enrollment at MC was 752 students, and the College's endowment was valued at around $12.5 million. At the conclusion of his 17-year tenure, the College had celebrated a record enrollment of 1,176 undergraduates and an endowment value of $55 million. He was preceded in death by his father and mother, Otis and Mavis Smart Gibson; and numerous uncles, aunts, and cousins. He is survived by wife, Rachel Plummer Gibson; children, Holly Gibson Yalove (Jay), Laura Gibson Owens (Casey), and Paul Gibson (Amanda); grandchildren, Alexandra and Madeline Yalove, Annabelle Owens, and Isaac Gibson; sister, Norma Webb; many brothers-and-sisters-in-law, nieces, nephews, great-nieces and nephews, and countless cousins. Gerald Gibson was a talented poet, painter, woodworker, and author of several books, most recently, the memoir of his tenure at Maryville College, Tenth Watch. He enjoyed singing and playing tenor guitar. He relished tending an extensive hosta garden, and had a passion for researching genealogy. He had the honor of serving on numerous non-profit boards and volunteering during Kin Takahashi Week on the Maryville College campus. He believed that no matter your circumstance, you could choose happiness. He always told his family that happiness comes from inside, not from outside. A private interment will take place in the College's cemetery. The public is invited to a memorial service, which will be held in the Ronald and Lynda Nutt Theatre inside the Clayton Center for the Arts on the Maryville College campus at 2 p.m., Fri., June 11. The family will receive friends following the service in the William Baxter Lee III Foyer of the Clayton Center for the Arts. The event will be live-streamed on the Maryville College website. In lieu of flowers, the family has asked that gifts be made to the Gerald Gibson Professional Development Fund at Maryville College, 502 E. Lamar Alexander Pkwy, Maryville, TN 37804 or online at www.maryvillecollege.edu/givetoday. Arrangements by Smith Funeral & Cremation Service, Maryville, TN. Read the full obituary and service details at www.SmithFuneralandCremation.com. Visit our guestbook at legacy.com/obituaries/charleston
Published by Charleston Post & Courier from May 22 to May 23, 2021.
To plant trees in memory, please visit the Sympathy Store.
MEMORIAL EVENTS
Jun
11
Memorial service
2:00p.m.
Ronald and Lynda Nutt Theatre inside the Clayton Center for the Arts
TN
Funeral services provided by:
Smith Funeral & Cremation Service
MAKE A DONATION
MEMORIES & CONDOLENCES
Sponsored by Smith Funeral & Cremation Service.
2 Entries
Condolences to the family. Met Dr. Gibson through KT week. He would visit all the worksites with a kind word and a big thank you.

His vision and support of the volunteer week ensured it's success.

Enjoyed chatting with him at the Physical Plant in his retirement.
steve zilles
Friend
May 24, 2021
I was saddened to read of the passing of Dr. Gibson. I first met him as a freshman chemistry major in the fall of 1966. I like to think of him as a teacher, a mentor, and a friend who helped me to develop a love for Chemistry and seeking of knowledge. I watched how this dedicated bachelor met a young lady during summer break, Rachel, and became such a man in love leading to a lifelong love affair. He was such a renaissance styled person. With graduation in 1970, I was not able to keep in touch with him but knew of his tenure as President at Maryville. He made a difference in my life. The world will be a little more lonely without this kind soul. Rest in Peace, Dr. Gibson.
Thomas Henson
Friend
May 24, 2021
Showing 1 - 2 of 2 results