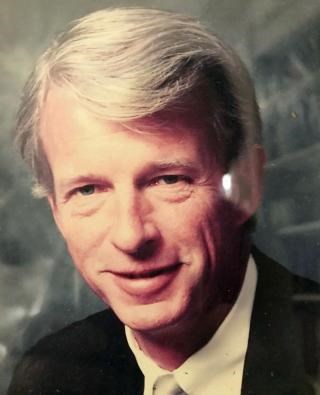 Ellis Johnston II Greenville SC - After enduring the lengthy and debilitating disease of PSP, Ellis Murray Johnston II died peacefully in his sleep, holding hands with his wife, Mary Burnet. Though his body deteriorated, his mind was keen to the end and he enjoyed the stories of his golfing friends, the company of his family, and the taste of Jack Daniels. Ellis was one of three sons born to James Shuttleworth Johnston and Laura Peace Echols. His younger years were spent in Greenville. He attended The Darlington School in Rome, Georgia, then went on to study and play at Washington and Lee University in Virginia. He loved his years at W&L. The friends he made in college were a part of his life until the end. The adventures those friends shared will live on as stories for years to come. For example, he and his roommate had not yet been invited to attend a dance at Hollins College. The solution? Make flyers saying "Bid Gates and Ellis to the Hollins Cotillon", rent a plane, fly over Hollins Campus and drop the flyers. The outcome? Ellis' father took away his pilots license, but we still don't know if he was invited to the dance. Upon being graduated from W&L, Ellis joined the United States Army and served his country as a Lieutenant from 1968 until 1972. He then attended the University of South Carolina School of Law. After graduation, he moved back to Greenville and joined the firm of Haynsworth Perry Bryant Marion and Johnson, now Haynsworth Sinkler Boyd. As an adult, he loved practicing law and playing golf. He was an excellent lawyer and always enjoyed being in the courtroom. He was an avid, but perhaps not excellent, golfer. Playing with the Thursday group of golfers was the highlight of his week. Ellis was a man of routine. At the end of every day, he enjoyed sitting outside in his rocking chair with a Jack Daniels in his hand, a cigarette in his mouth, music in his pocket (thanks to cell phone technology), and his dogs at his feet. The last music of the night was always Pachelbel's Canon in D. When the dogs heard this, they knew it was time for bed and they would get up and go to their kennels. For Ellis, this music was a beautiful way to signal the end of the day and the time for rest. Ellis was funny, smart, and kind. He will missed by many. He was predeceased by his parents and his granddaughter, Lulu. He is survived by his wife, Mary Burnet, his brothers, Jim (wife Nan) and Charlie (wife, Beverly); his children, Trip (wife, Jodi), Caldwell (wife Mary Claytor), and Annie (husband, Andy); his step-sons, Burnet (wife, Elysia) and Butler (wife, Hayden); seven grandchildren, 3 step-grandchildren and many nieces, nephews and cousins. His funeral will be on Monday, January 17 at 2:00 at Christ Church Episcopal, where he will be buried.The family will receive visitors immediately following the burial at the Westin Poinsett Hotel. For those wishing to make memorial contributions, please consider donating to the restoration of the Stephenson Courtyard at Christ Church Episcopal, 10 N. Church Street, Greenville 29601. Condolences can be made to the Johnston family at www.MackeyCentury Drive>com Visit our guestbook at legacy.com/obituaries/charleston
Published by Charleston Post & Courier from Jan. 14 to Jan. 16, 2022.
To plant trees in memory, please visit the Sympathy Store.
MEMORIAL EVENTS
Jan
17
Funeral
2:00p.m.
Christ Church Episcopal
SC
MAKE A DONATION
MEMORIES & CONDOLENCES
0 Entries
Be the first to post a memory or condolences.