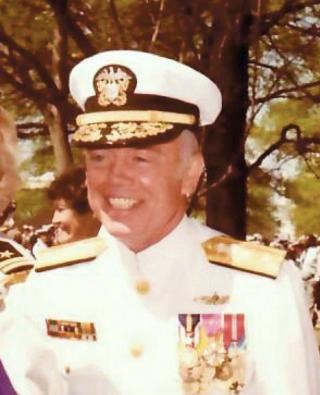 FUNERAL HOME
J. Henry Stuhr Mount Pleasant Chapel
1494 Mathis Ferry Road
Mount Pleasant, SC
UPCOMING SERVICE
Service
Mar, 26 2022
1:00p.m.
J. Henry Stuhr Inc., Mount Pleasant Chapel
Send Flowers
Charles Horne, III Mt. Pleasant - Admiral Charles (Chuck) F. Horne III (USN, Ret.), 90, of Mount Pleasant, South Carolina, passed into Heaven to join his so loved wife, Flora, on Monday, November 29, 2021. A memorial service will be held on March 26, 2022 at 1:00 pm at J Henry Stuhr, Inc. Mount Pleasant Chapel. Admiral Horne was born on March 22, 1931 in San Diego, California, son of the late Charles F. Horne Jr. and the late Evelyn Tuttle Horne. He received his Bachelor's Degree from the U.S. Naval Academy in 1952 and Master's Degree from the Industrial College of the Armed Forces in 1968. Admiral Horne served in the United States Navy for 39 years, in command of two ships at sea, two destroyer squadrons, as commander of the 51 swift boats in Vietnam, and as Commander of the Mine Warfare Command, here in Charleston from 1979 to 1984. He then served in South Korea as commander of U.S. Naval Forces Korea from 1984 to 1986 and simultaneously as United Nations Chief Negotiator with the North Koreans and the Chinese at the DMZ. Admiral Horne was married 61 devoted years to Flora Eustice Horne, who passed into Heaven in April 2016. Admiral Horne lived in Mount Pleasant for over 26 years and so enjoyed this wonderful city and all of its wonderful people! He is survived by his son, Charles F. Horne IV, and his wife, Victoria Moore, of Marin County, California; his daughter, Carolyn Jackson, of London, England, and granddaughter, Solenne Jackson, currently attending Yale University; and grandson, Charles W. Horne V, of Washington, DC. A memorial message may be sent to the family by visiting our website at www.jhenrystuhr.com. Visit our guestbook at legacy.com/obituaries/charleston
Published by Charleston Post & Courier from Dec. 4 to Dec. 5, 2021.
To plant trees in memory, please visit the Sympathy Store.
MEMORIAL EVENTS
Mar
26
Service
1:00p.m.
J. Henry Stuhr Inc., Mount Pleasant Chapel
1494 Mathis Ferry Road, Mount Pleasant, SC
Funeral services provided by:
J. Henry Stuhr Mount Pleasant Chapel
MAKE A DONATION
MEMORIES & CONDOLENCES
Sponsored by J. Henry Stuhr Mount Pleasant Chapel.
7 Entries
We are so sorry to hear of The Admirals passing. It was a pleasure to live next door to him and get to know him. He was a great man who will be missed.
Sincerely,
Sally and Freddie Heath
On the Harbor neighbor
Sally and Freddie Heath
Neighbor
December 15, 2021
I served under Admiral Horne for 3 1/2 years at COMINEWARCOM. He was the strongest advocate for Mine Warfare that community ever had. He was fearless and never backed down from spreading his Mine Warfare message. While some may have questioned his approach at times, there was never any doubt concerning his sincerity and dedication to his task. I was privileged to have known and worked with him.
Jim Aaron
Work
December 8, 2021
Fond memories of playing tennis with Chuck on the Charleston Navy Base courts in the 1980s---always competitive but lots of fun! A true gentleman and patriot. Condolences to the family.

Linda and Rik Dilgren
Linda Dilgren
Friend
December 8, 2021
We are so sad to hear this news. The Admiral was a great guy and we were glad to know him during my years as his aide at CMWC. He will be missed, Bob & Nora
Bob Trzeciak ... Adm Horne's aide CMWC 81-83
December 8, 2021
Admiral Horne was the best part of my day when he would call us at Belva's Flower Shop. He was so full of love and kindness. He sent flowers all the time to show his appreciation to others. We will always be remembered and forever be in my heart.
Kristen Garza
Acquaintance
December 6, 2021
It was a personal honor and a professional privilege to have known him. Rest In Peace Shipmate.
FORCM (SW/AW) Bob Conklin USN (Ret)
Other
December 6, 2021
The Admiral was the best neighbor in the world for 25 years. He was a true gentlemen in every respect. Always so thoughtful with flowers and lunch dates. We will miss him, but know that he is so happy to be in heaven with Miss Flora. We send our condolences to Charles and Carolyn and their families.
Jeanne& Cal Colvin
December 5, 2021
Showing 1 - 7 of 7 results